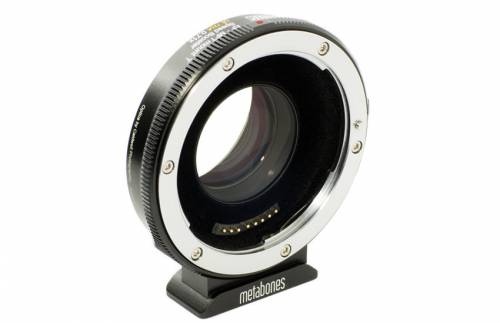 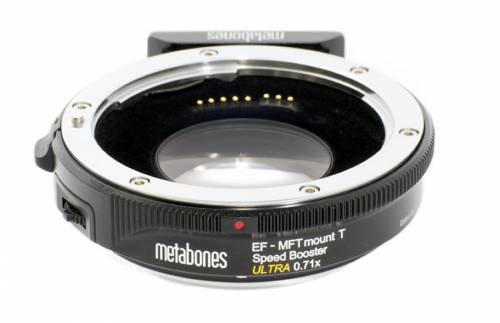 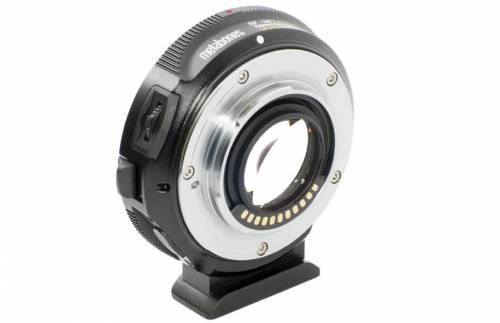 Optical
Electronic
Other
LIMITATIONS
Always Enhance and Never Degrade the Performance of the Attached Master Lens
Like the ULTRA series for Sony E-mount, the new Speed Booster ULTRA m43 uses an advanced 5-element 4-group optical design incorporating ultra-high index tantalum-based optical glass.  However, the new design is specifically optimized for the Micro Four Thirds sensor and filter stack, and as a result achieves an astonishing level of performance that sets a new standard for focal reducers.
Like the revolutionary original Metabones Speed Booster® announced in January 2013, the Speed Booster ULTRA m43 has a magnification of 0.71x, and so it effectively reduces the crop factor of mirrorless Micro Four Thirds mount cameras from 2.0x to 1.4x.  However, the new ULTRA design makes very effective use of exotic materials at the furthest limit of glassmaking technology, and as a result is almost perfectly corrected for use with all fullframe SLR lenses regardless of aperture.  The Speed Booster ULTRA m43 will also work extremely well with many DX and APS-C format lenses provided the image circle of the lens is large enough.  Optical performance of the new Speed Boosters is so good that the MTF of any lens attached to it will be improved.  Even the latest generation of ultra-high performance SLR lenses such as the Zeiss Otus series can be improved by adding a Speed Booster ULTRA m43. (More information can be found in the press release here and whitepaper here)

Autofocus with an Optimum Balance of Accuracy, Speed, Consistency and Reliability
New in Speed Booster ULTRA for Canon EF Mount to Micro Four Thirds is autofocus on Panasonic camera bodies, subject to certain limitations (see table above for details). We are pleased to report that Panasonic Micro Four Thirds camera bodies are capable of autofocusing accurately even if the maximum aperture of the Speed Booster and the lens combined is in the sub-f/1.0 range. Although our first and foremost priority is accuracy, we are able to make great strides in autofocus speed as well.

Select the correct EF-MFT Speed Booster for your camera Remark: Your PayPal receipt is your order confirmation. There is no separate email confirmation until shipmen